Pre-Treatments for GC-FID / MS Analyzes – The Example of Hydrosols 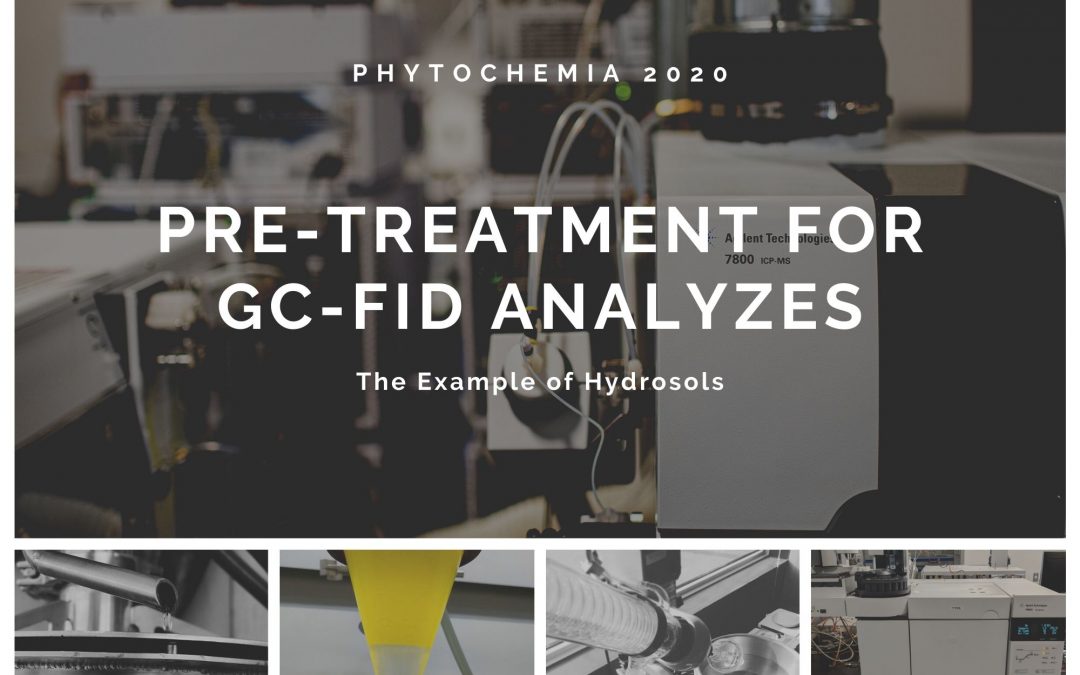 Samples often contain very different molecules. In analytical laboratories, finding the instrument which will identify and quantify them is the first step. For this purpose, the chemist must ensure that the chosen method can “separate” the compounds of interest but also makes them “visible” to the detectors.

Which Molecules can be Analyzed by GC-FID?

To be “separated” in gas chromatography (GC) (principle here), molecules must be volatile and thermally stable. That means they can pass into a gaseous state for temperatures typically below 325 °C without decomposing themselves. To be “seen” by the Flame Ionization Detector (FID), molecules must be oxidizable to the contact of the flame to emit ions that can be counted by the detector. Organic compounds such as hydrocarbons and partially oxygenated compounds are detectable. Water, which is an inorganic molecule, is undetectable, like some small highly oxygenated compounds.

This introduction helps to explain why essential oils that contain exclusively volatile organic compounds are “ideal” candidates for GC-FID analyzes. Without any pretreatment, all the molecules of the sample may show on the chromatogram.

How to Deal With Hydrosols ?

Hydrosols also contain volatile organic compounds, but they are diluted in a huge amount of water. Since water is undetectable by the FID detector, no indication can be obtained on the volatile molecules’ concentration. Moreover, this low concentration also generates such a low intensity signal that it can be hardly analyzable. Finally, the massive injection of water in the chromatographic columns we use routinely may damage them.

A pretreatment step is therefore necessary to get rid of the water and concentrate the sample.

Liquid-liquid extraction to concentrate the sample and suppress water

To concentrate dilute solutions, liquid-liquid extraction is a commonly used process. The compounds to analyze (analytes) are extracted from their initial solvent and transferred into another solvent with more favorable chemical or physical properties in view of a subsequent treatment.

In the case of hydrosols, the solvent must be:

Knowing that compounds tend to dissolve more easily in solvents with similar properties to that of the compound itself [Read more : you said polar?] a suitable type of solvent can be selected. Volatile organic molecules of hydrosols (monoterpene alcohols, monoterpene ketones, monoterpene oxides, phenolic compounds, etc.) are moderately polar and are surrounded by a very polar solvent (water). Choosing a moderately to slightly polar organic solvent like diethyl ether, dichloromethane (DCM) or acetone, ensures an optimum transfer of the analytes from water to it.

Among these three solvents, acetone is miscible in water and would be unsuitable for a liquid-liquid extraction, but both diethyl ether and DCM, immiscible in water and with boiling points below 40 °C, are good candidates. (Fun fact: diethyl-ether is less dense than water while DCM is denser. Therefore, in the liquid-liquid extraction diethyl ether would be above water while dichloromethane would be below). Tests done in the past at PhytoChemia suggest that dichloromethane does a better job than diethyl ether under the circumstances.

While the analytes are now trapped in a highly volatile solvent, it becomes easy to distill the solvent using a rotary evaporator. This device operates under a reduced pressure, and speeds up the solvent evaporation by decreasing the solvent boiling temperature [Read more : Advantage of working at reduced pressure]

Comparison between different batches is essential in quality control. To circumvent the undetectability of water by the FID, an internal standard is added in the final extract in a known amount. A corrective factor to the peak intensity values is obtained and it is then possible, with a series of calculations and taking specific precautions, to compare the weight of each compound in mg/ liter of hydrosols between each batch (relative to the standard).

This is the end of the first post on pretreatments. We’ll be back soon with another type of pretreatment.