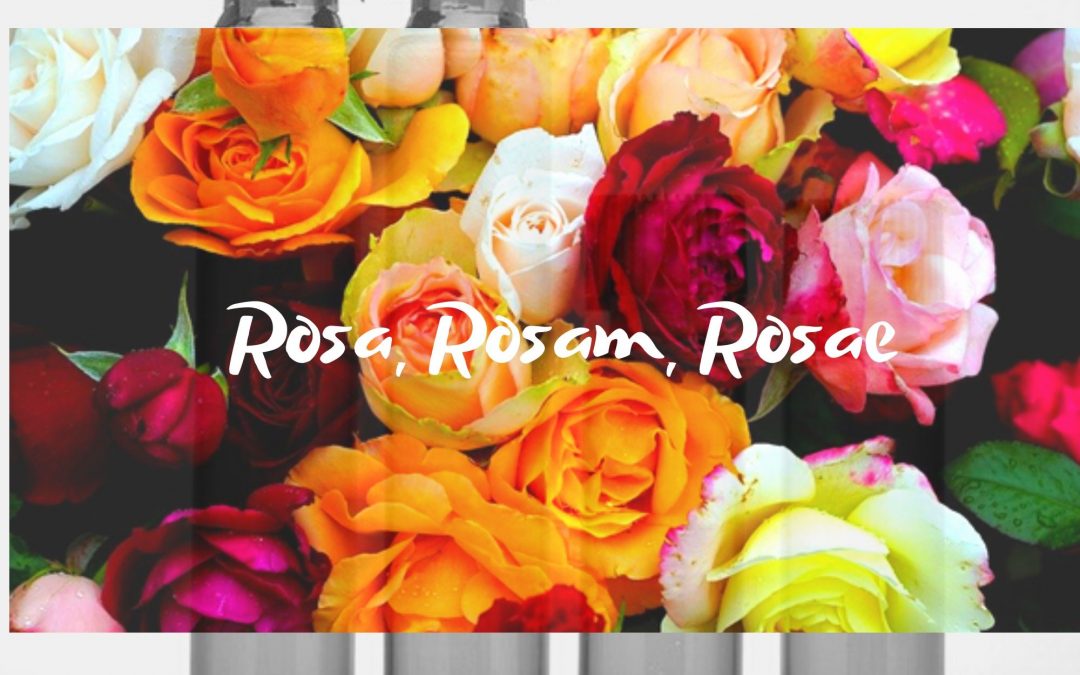 As suggested by the Latin declension of the title, this February we will look at a series of blog posts on the theme of roses.

In this first post, we will start with a historical overview of the rose’s botany and a summary of the main methods to produce rose derivative products : essential oil, hydrosol, absolute and concrete.

A Brief History of Roses

Roses are plants from the Rosaceae family. The genus Rosa is subdivided in four subgenera. Eurosa subgenus is the most considerable, it contains the majority of the overall 100 to 300 species of roses (depending on the sources).

Roses are among the most cultivated plants in the world and hybridize easily even in their natural state. The 16,000 cultivar* types, currently available, result from millennia of transformations. Surprisingly, genetic tests show that most of the cultivated varieties result from roughly a dozen species and their derived taxa.

In botany it is commonly accepted to divide roses between old and modern varieties. Originally wild roses, also named botanical or antique (which include among the others wild heather rose such as Rosa canina generally employed as a rootstock) were predominant. These wild species are the most rustic, adaptative and very fragrant. They develop an abundant flowering for a brief period and only once a year. Rosa chinensis is an exception with a long flowering period.

In 1867, the first hybrid tea (Rosa ‘La France’) or large-flowered rose, developed by Jean-Baptiste Guillot, was the starting point for the explosion of ascending varieties i.e., featuring continuous blooming. The hybridization with Rosa chinensis had provided a repeat-blooming characteristic very suitable for cultivation. All cultivars or hybrids created after this date are considered as modern roses.  They were hybridized mostly in favor of their color or shape and as a consequence usually fail to exude the original rose fragrance.

This diversity leads to expect a great variability in chemical composition of roses. We will explore this subject later in the month.

Exploitation of roses for their olfactory or medicinal qualities is very antique. One of the first methods, now almost abandoned, is probably enfleurage. A fatty substance was used to obtain extractives from petals by maceration at ambient or low temperature. The process, which can be quite long and fastidious, was repeated until the oil or fat substance saturation. A fragrant oil or an ointment can be obtained thereof. There is a small market for this type of process. Current methods are distillation, extraction by solvents and more recently supercritical CO2 extraction.

The most popular essential oil comes from the Damask rose (Rosa × damascena) and the Provence rose (Rosa × centifolia). There is a great demand in perfumery and aromatherapy for these products.

Rose hydrosol, also called rose water, is the aqueous condensate obtained during the hydrodistillation of rose petals. It is often used in cosmetics and food industry. Several hydrosols and essential oils have the same origin: Damask and Provence roses.

The absolute of rose is obtained by extracting aromatic compounds from roses using solvents. Hexane is widely used since aromatic compounds, wax and rose pigments have a great affinity with it. The solvent is eliminated by distillation and/or evaporation under vacuum to produce an extract with a gelatinous consistency, an orange-red color and a typical odor of roses named the concrete. A second extraction with alcohol is generally performed on the concrete, to isolate the aromatic compounds of the concrete from the other components, and finally the solvent is filtered and evaporated to obtain the absolute.

In the supercritical CO2 extraction method, a supercritical fluid circulates in the plant matrix. This CO2 physical state, reached under specific temperature and overpressure conditions, gives it both the properties of a gas and a liquid. It can thus, like a gas, penetrate porous matrices and, like a liquid, dissolve compounds and entrain them. Subsequently, a depressurization leads to CO2 vaporization and an extract in liquid or solid form appears. In addition, depending on the operating conditions, the composition of the extract can be tuned. A selectivity towards lighter volatile molecules can be achieved, or an extraction of all the lipophilic compounds can be preferred.

This introduction to the world of roses is now over. We are waiting for you next week to break down these different extracts.