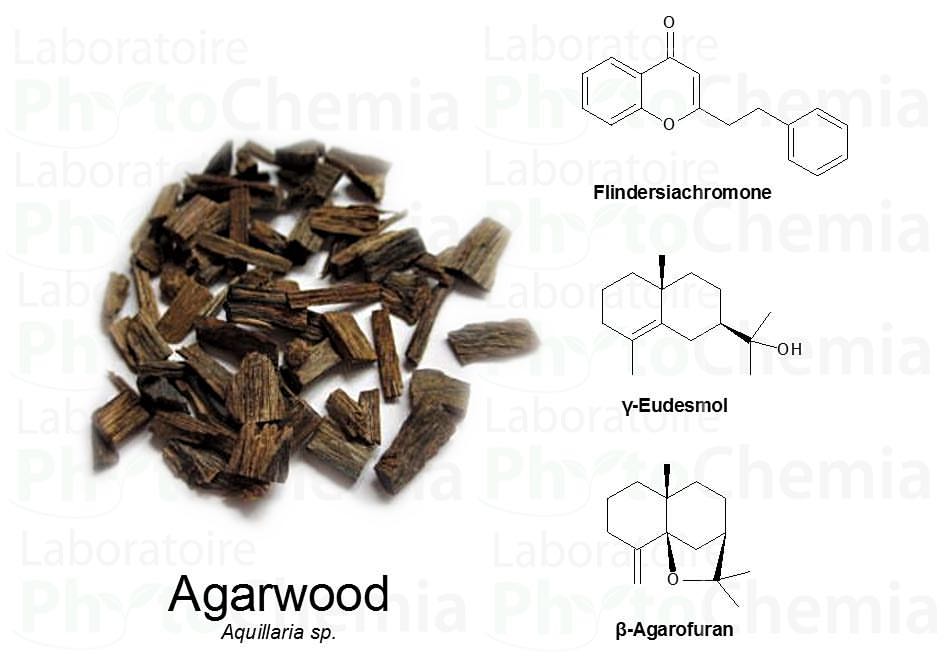 Agarwood: one of the most prized, rare, and exotic essential oils. We have discussed on these pages earlier the most common problem encountered with this material on the market, that is, serial dilutions with carriers. But what is to be expected into agarwood oil itself?

There have been numerous studies on this precious essential oil, and on agarwood itself (a thorough review on all compounds reported up to 2011 has been published [1]). The chemistry of this material is quite peculiar, and leads to some molecules that are rarely found elsewhere. Here are a few compounds that have been reported consistently accross several studies, and can thus be considered characteristic of agarwood. 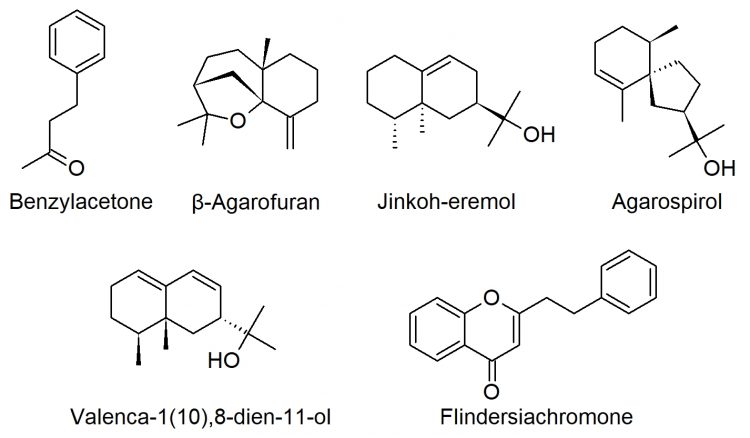 Benzylacetone is one of the most commonly reported constituents of agarwood oil and extracts [1]. There are many other phenolics in lower amounts in agarwood oil, but this is the main one. Strangely enough, despite a balsamic scent, this compounds tastes of strawberry, according to The Good Scents Company [2]. It is observed and reported in any amount between 0.5% and as high as 8% of agarwood oils, and has been reported as one of its characteristic aroma-determining compounds [3].

Benzylacetone is suspected to be a “side-product” of another very important metabolic process in agarwood, leading to a series of 2-phenylethylchromones [4]. The vast majority of these heavier phenolic compounds are not volatile enough to make it into the essential oil, but small amounts of flindersiachromone are often found at the very end of the chromatogram. This group of chromones is very specific to agarwood, and has attracted significant research interest for years due to some interesting biological properties [5].

β-Agarofuran is another prominent and often-mentionned constituent of agarwood oil. It can make up to 14% of the essential oil. It has been reported as one of the main aroma contributors of the oil, with woody and nutty notes [3].

Jinkoh-eremol and valenca-1(10),8-dien-11-ol are a few of the rare eremophilane-type sesquiterpenic alcohols and ketones found in agarwood. They illustrate the results of decades of research by chemists into the peculiar chemistry of this oil, especially in eastern Asia [1]. Jinkoh-eremol is often hard to spot due to coelutions, but has been reported as high as 11.5% in the oil, whereas valenca-1(10),8-dien-11-ol can account for up to 5.2% of it according to our current data. An important thing to note, these compounds are not part of the main commercial mass spectral databases. This makes them harder to identify without digging into scientific literature, and you should not get worried if they are not listed in an agarwood oil analysis reports.

Agarospirol is one last interesting sesquiterpene we wanted to mention, because its molecular frame is less common. It belongs to the family called vetispiranes, also notoriously abundant in vetiver oil. Other similar sesquiterpenes have been found over time in agarwood, with inspiring names such as 2,14-epoxyvetispira-6(14),7-diene [1]. Agarospirol is also interestingly found in some geranium oils, which can also share with agarwood the presence of 10-epi-γ-eudesmol.

Overall, agarwood can contain dozens and dozens of unusual or even unknown sesquiterpenes, and feature considerable variation between batches. It goes without saying that this plant material still has several secrets calling for ongoing scientific interest.