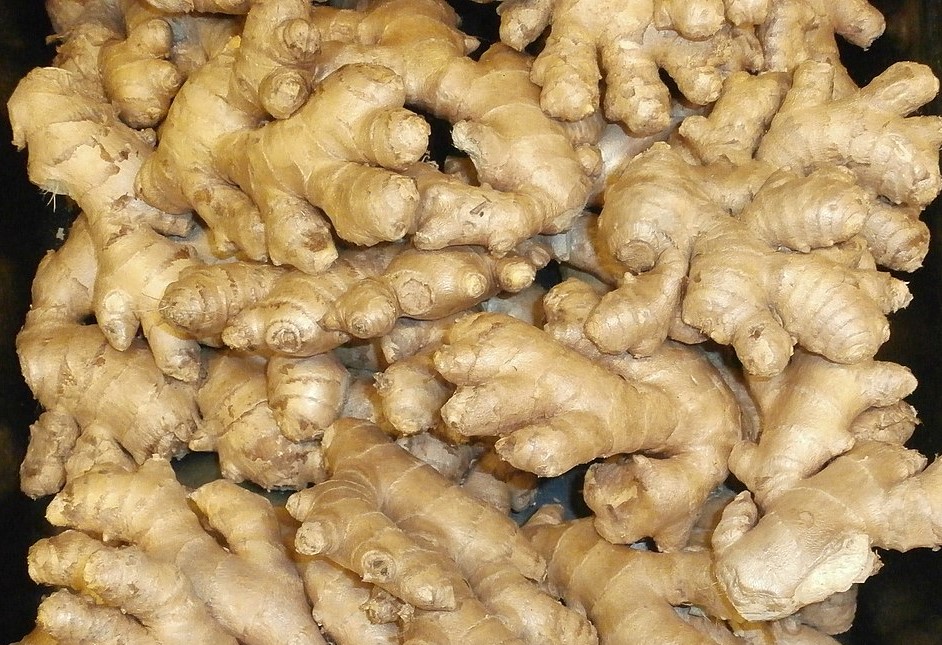 Some aromatic plants are particularly associated with Christmas time. This week, we would like to talk about one of them which is used in mulled wine, in candied form and which even has given its name to a spiced bread we specially cook for Christmas: ginger (Zingiber officinale).

Ginger is mainly cultivated for its large rhizomes which, being storage organs, mainly contain starch, proteins and lipids, but also 1 to 4 % of essential oil and some phenolic compounds responsible for ginger’s spiciness: the gingerols (with an ‘’s’’ because the side chain of the molecule can be more or less long) as well as their derivatives, the gingerdiols and the deoxygingerols (paradols). The main gingerol is the [6]-gingerol. It mainly degradates into [6]-shogaol (more pungent) during dehydratation and zingerone (less pugnent) during cooking/distillation.

The essential oil of ginger (figure 22) generally contains small quantities of zingerone (L), but not the others phenolic compounds which are heavier and/or thermosensitive (they are only present in some ginger extracts like CO2 extracts).

The oil also contains some other characteristic compounds, and especially α-zingiberene (D) (approx. 30-35 % of fresh essential oils). This sesquiterpene is described as having a spicy, fresh and sharp scent, and bears its name accordingly. Other characteristic sesquiterpenes of ginger oil are ar-curcumene (C), β-bisabolene (E),  (E,E)-α-farnesene (F) and β-sesquiphellandrene (G), which is an isomer of α-zingiberene.

Ginger oil contains camphene (A) as its main monoterpene, as well as (often) some traces of bornyl methyl ether (B) which is a relatively rare monoterpenic ether found in ginger.

A few typical sesquiterpenic alcohols are also found in small amounts in ginger, and rarely elsewhere: sesquisabinene hydrates (H and I) and zingiberenols (J and K). These are also encountered in curcuma essential oil, a plant belonging to the same botanical family (Zingiberaceae).