The flora of North America is still lush with aromatic plants that have not (yet) been studied for their volatile compounds. One of these blindspots was, up to recently, a plant commonly called Indian celery (figure 1), as well as cow parsnip, which is found throughout the continent.

This species (Heracleum maximum Bartram, by its formal botanical name) is named this way because of its interesting traditionnal use. It reportedly was one of the main vegetables eaten by some populations of Amerindians, especially in the western part of North America [1]. The leaf’s stalks, which share a round and fibrous nature with celery (both plants belong to the same botanical family, the Apiaceae), were collected when they were still young and tender. They then were peeled. Indeed, the First Nations had learned over time to avoid the toxicity of the species, which is caused by furanocoumarins present on the whole plant’s surface. Such compounds induce skin irritation after exposure to the light, and inflammation of the mouth [2]. The seeds also found their used among settlers in North America, as an easily accessible spice [3].

Such dietary uses probably were in part linked to the aroma of the plant. The Heracleum genus is accordingly widely studied around the world for its essential oils. Yet, the Indian celery, being the only native Heracleum in North America, stayed under the radar. We thus decided to check out what the plant had to offer to the world of essential oils. The result of our investigation was recently published in the Journal of Essential Oil Research [4]. The complete analysis is quite lenghty, with over 110 compounds identified in each oil, but here are some salient features. 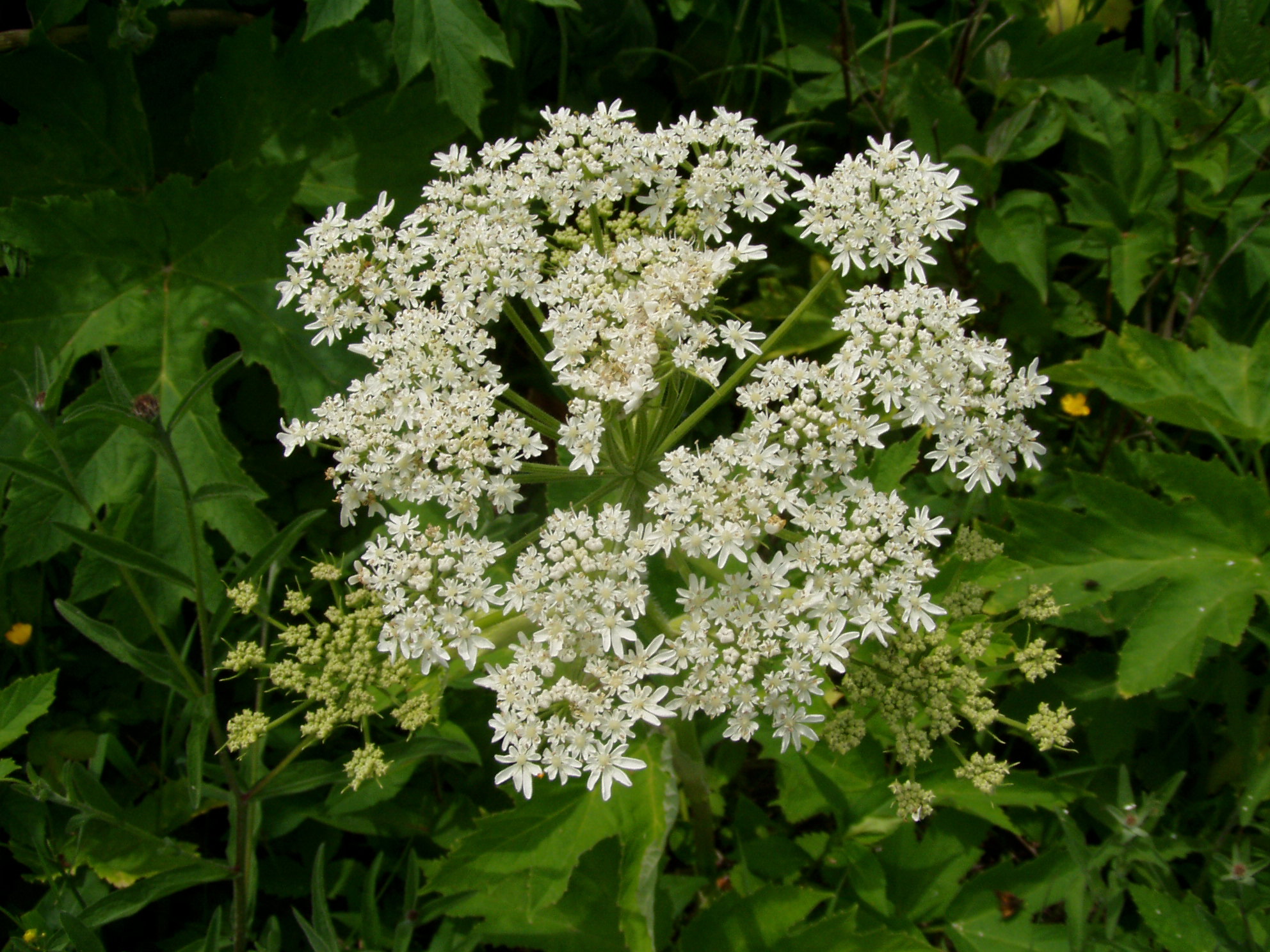 The stalks feature a zesty, citrus-like scent which translated into the oil, which was however obtained in very low yield of 0.02%. Yet, this aroma most likely contributed to the use of the plant as a vegetable and even a dessert. Its composition was dominated by limonene (45%), followed by other monoterpenes, for the most. As far as other compounds are concerned, the presence of isodaucene (0.5%), daucene (traces) and (Z)-falcarinol (3.3%) should be noted. These are often found in plants of the Apiaceae, and it was interesting to observe these in cow parsnip as well.

The seeds had a completely different aroma, which we described as pungent and earthy. They contained much more oil (0.41%), which featured a composition dramatically different from that of the stalks. This is not unexpected, as this phenomenon was observed in most Heracleum species studied to this date. As most members of this genus, the seeds of Indian celery were rich in aliphatic esters, mainly related to octanol (6%): octyl acetate (66%), octyl butyrate (8%) and octyl hexanoate (2%) were the main ones. We compared this profile with that reported for several other Heracleum species, which also makes our article a small review on the seeds’ oils of the genus: this table is reproduced below (Table I).

Table I. Review of the Composition of Heracleum species seeds’ oils composition

With this kind of oil yield, a larger scale distillation of Indian celery seeds could be realistically considered. Cow parsnip is likely not the only North American plant that would deserve some more attention from the essential oils community, and is a good example of the numerous findings that still can be made in our field!

[4] St-Gelais, A.; Collin, G.; Pichette, A. Aromas from Quebec. V. Essential Oils from the Fruits and Stems of Heracleum Maximum Bartram and Their Unsaturated Aliphatic Acetates. J. Essent. Oil Res. 2016, 28, 1–11.